Are refrigeration and air-conditioning systems increasing the planet’s temperature?

Home refrigeration and air conditioning contribute to the global warming of the planet.

Home refrigeration and air conditioning contribute to the global warming of the planet. This is due to the fact that these appliances contain refrigerant chemical compounds called Hydrochlorofluorocarbons (HCFC) and Hydrofluorocarbons (HFC). HFCs were considered an alternative to HCFCs, which were ozone-depleting substances (ODS).

While HFCs do not contribute to the Ozone Depletion Potential (ODP), these gases have high Global Warming Potential (GWP), meaning their use actively contributes to the worsening of this phenomenon. In Mexico, the national consumption of HFC has increased by an annual rate of 14.5% in the period from 2007 to 2017, going from 12.75 million tons of carbon dioxide equivalent (MtCO2e) to 49.43 MtCO2e. The increase in HFC is directly linked to production increase in the following sectors: 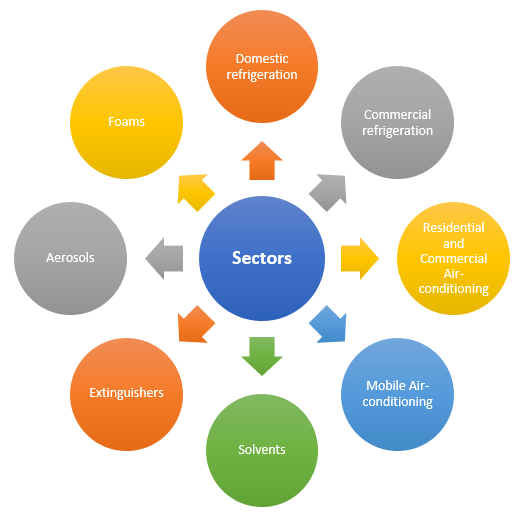 The planet’s rising temperature has meant that conserving food, medicine, and other perishables – as well as maintaining human comfort – have become critical necessities. For this reason, an additional increase to refrigeration consumption in the next few years is inevitable. This also means that the refrigeration sector is directly linked to several Sustainable Development Goals (SDGs).

With the intention of decreasing the consumption of HFCs, the Mexican government has adopted and developed several public policy instruments, and the Montreal Protocol Unit of the Ministry of the Environment and Natural Resources (SEMARNAT), with the support of the project Sustainable and climate-friendly Phase-out of Ozone Depleting Substances (SPODS) of the Deutsche Gesellschaft für Internationale Zusammenarbeit (GIZ) GmbH, developed the National Diagnosis for the Mitigation of HFC Emissions. In addition, in November 2019, a planning workshop was held for the socialization of the Kigali Amendment and for the HFC Reduction Plan.

The diagnosis identifies mitigation actions for each one of the sectors that consume HFC. The majority are actions that involve replacing HFCs with low-GWP alternatives such as hydrocarbons and mixtures of Hydrofluoroolefins (HFO). For example, they suggest using R-600a (isobutane) in the domestic refrigeration sector, while for the commercial sector, they recommend R-290 (propane). The document also highlights the importance of implementing the recovery, recycling, and destruction of refrigerating gases.

As its primary outcome, the study proposes 11 mitigation measures that are feasible in the Mexican sectors of HFC consumption. These measures are aligned with the Kigali Amendment and can be included as part of Mexico’s conditional NDCs and contribute to the fulfillment of several SDGs. One example of the suggested measures is the substitution of HCFC-22 and R-410A with alternatives such as R-32 (difluoromethane) during the period of 2020 – 2045. It is estimated that this measure has a mitigation potential of 1.2tCO2e per substituted device, with a cost of $500 USD per device.

Making sure that these actions can be taken to an implementation phase will depend on the commitment of the government, private sector, and society itself when buying refrigeration systems that contain natural refrigerants. You can consult the diagnosis yourself to find out more details about the measures and suggestions for HFC mitigation.